Personal Info
Before I introduce you to the photographer, I feel that it is important to get to know the person behind the camera. I'm Adam, a self-proclaimed nerd that loves to crack unfunny jokes and eats a PB&J (with grape jelly) every day. I enjoy watching anime, reading manga, and I play Dungeons & Dragons. I do not drink alcohol, smoke anything, or use profanity of any kind.

My History
As the son of a 5-time Grammy and 8-time Golden Mike award-winning editor for Fox News, I was exposed to the "media" life early on. I started acting at a young age, appearing in commercials and small video series', never really realizing that my media exposure was developing my passion to create and capture.  While I never really cared to be a full-time actor, I found myself always accepting jobs on different film sets, just to be around the creative minds.

In high school, I started exploring some of Adobe's creative software for video production and would spend hours creating and developing my filmmaking skills.  Several of my video effects were such a hit amongst other students and my teachers, that I actually made a decent amount of money charging students that needed help with video projects and presentations. When a representative from Brooks Institute of Photography came to my campus to promote his college, I showed him a few of my video effects and was eventually offered a full scholarship.


Shortly after being accepted to Brooks, and exploring the campus and different departments, I realized that photography was something different and challenging that I wanted to try.  Once I picked up my first digital SLR in 2006 it was all over from there, photography became my new passion!

I started photographing everything from the ducks and birds at the park nearby, to my siblings who got annoyed VERY quickly.  It wasn't long until a friend of mine was getting married and needed a wedding photographer on a budget that would keep enough money in their pockets for the honeymoon.  Terrified, I shot my first wedding that same year I bought my DSLR camera and I've been shooting ever since. 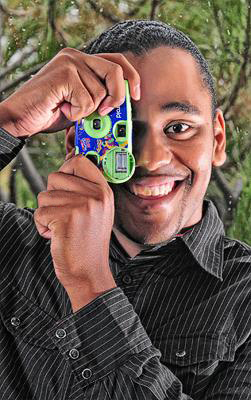 Sign up for email promotions.
no thanks
Thank you for signing up!
Close
Loading More Photos
Scroll To Top
Close | Clear All & Close
Close Window
Loading
Close